Do you know, if there is a Women’s Museum in your proximity?

Mansoureh Shojaee – Jeff and Marcia are an artist and documentarian couple. I met them while they were working on their most recent documentary. While chatting with them casually, which usually is more interesting than the  “official discussion”  people have, we came to know about each others’ taste in art and literature. While we were doing this, we came to know how much more we have in common.

One of the things that we share is the love we all have for Joan Baez, who has been the singer of songs of peace and justice for over fifty years, since the social movements of the late 60s in Europe until today.

Jeff and Marcia have numerous friends all over the world. One of their friends, Bill Shipsey, is the founder of Amnesty International’s “Art for Amnesty,” and also a friend of Joan Baez. He told them that Joan Baez is coming to Paris in February 2019 to perform. During their conversation, these three artists decided to introduce me to Baez in Paris.

Jeff, Marcia, and Bill told me about their wonderful decision. Without hesitation, on the wings of the heavenly voice of Joan Baez, my mind flew back to Iran.

We were a group of women’s rights activists in Iran who were supposed to conduct a demonstration in front of Tehran University on 12 June 2005. We wanted to sing a song during our demonstration. Iran is a country of poetry and music, and Iranian artists have composed many songs about the gladness and grief of the Iranian people since the constitutional revolution. But there is no song for us, the women of Iran!

Noushin Ahmadi Khorasani, an author and activist in the women’s movement in Iran who was born during the social movements of Europe in the late sixties, was inspired by the anti-violence and equalitarian personality of Joan Baez and composed a simple poem based on the song “The Ballad of Sacco and Vanzetti.” We all went to a small sound recording studio. The owner was a neighbor and a friend of one of us. The young man was amazed to see a group of amateur but decisive women who wanted to record a song. He tried to fit us all in the small recording room with difficulty, and we started singing with our activists’ confidence despite of our amateur status!!. The young man told us that we need to sing more in harmony. We sang again. This time, he told us that it might be better if one of us who has a clear voice and is most familiar with the song, would sing it solo, and then he would be able to repeat the same voice over and over again in the recording for it to sound like a chorus. None of us agreed to that. We were not singing an art piece. We were recording the memory of a moment in our movement. This would be a song for one of the biggest demonstrations of women after the revolution. The song was recorded using the simplest facilities, and by the voice of a group of women, a few of whom were singing for the first time and had never sung in front of others.

While  preparing to meet Joan Baez,  I wanted to fly and bring this song from the streets of Tehran, from that small basement, to the streets of Paris, to the Olympia music hall, and on behalf of the Iranian women of these years, dedicate it to Joan Baez.  Our singer, a woman “for ever young”!

Although this song and other songs made by the women’s movement members  in Iran are accessible to the public through social media, and although it is listed in the IRWMM and Feministschool, we, the ones who originally sang it, wanted it to dedicate it face to face to the one who had inspired it. And that is what happened.

My friends! Jeff, Marcia, Bill, Joan, Mark, Silvy, Carmen,….! This was the  story of the song and of that meeting.

And now  We will be with you in a concert for all those who love peace, justice,and equlity. Right now   we are singing together the Iranian women’s movement narrative of that balad:  “A different world is possible, and our endeavor is building it…” 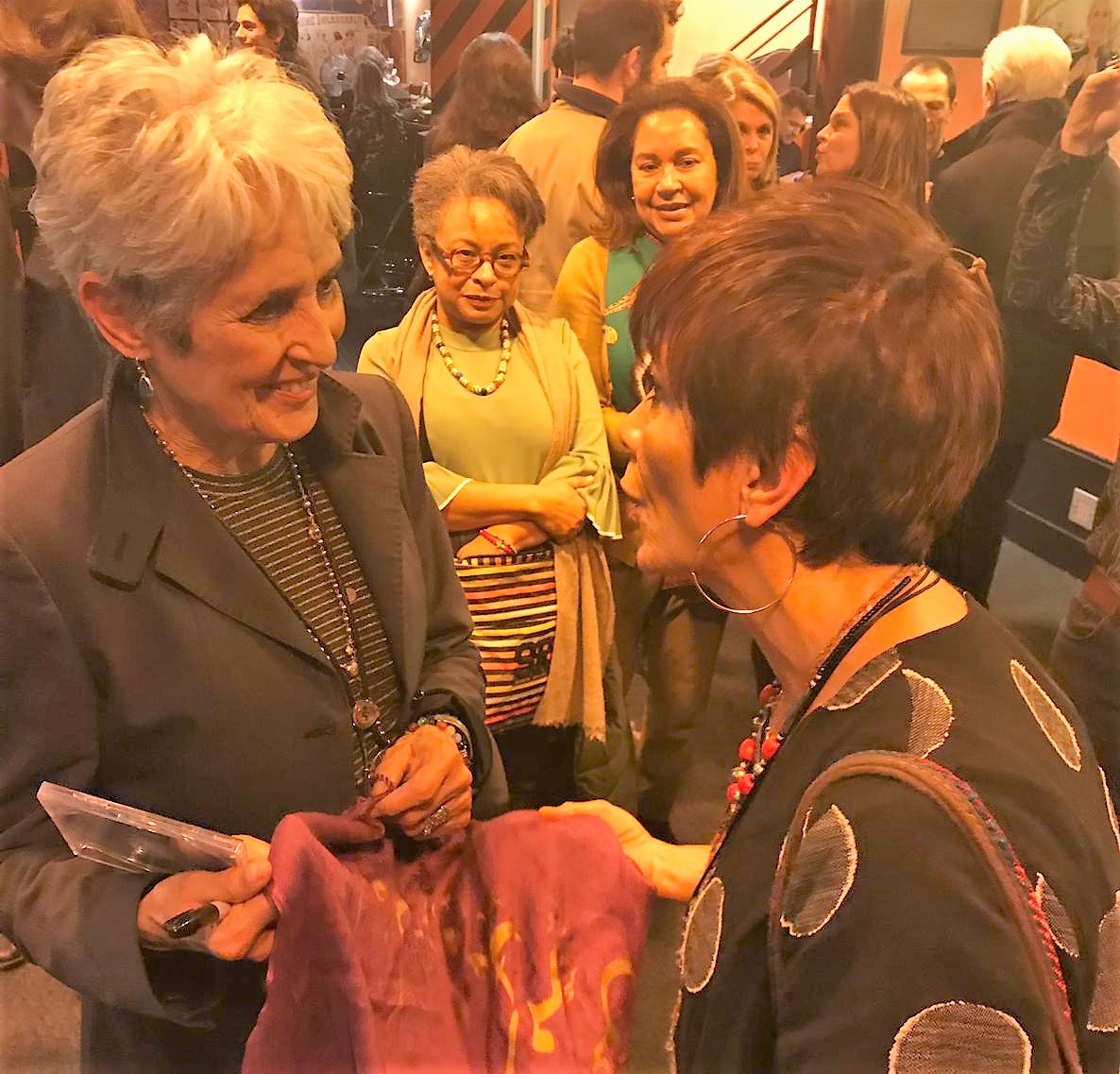 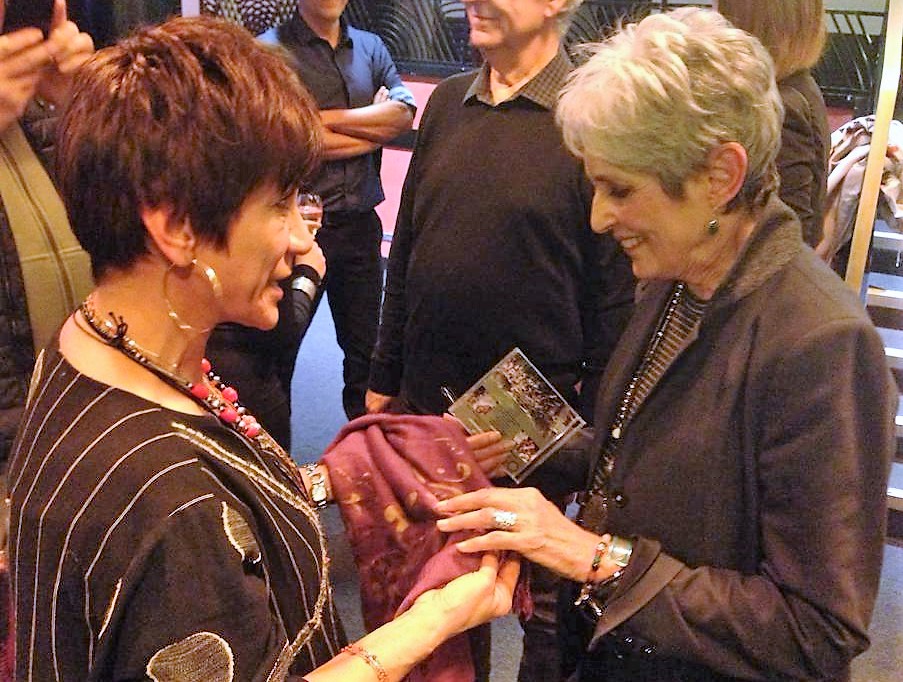 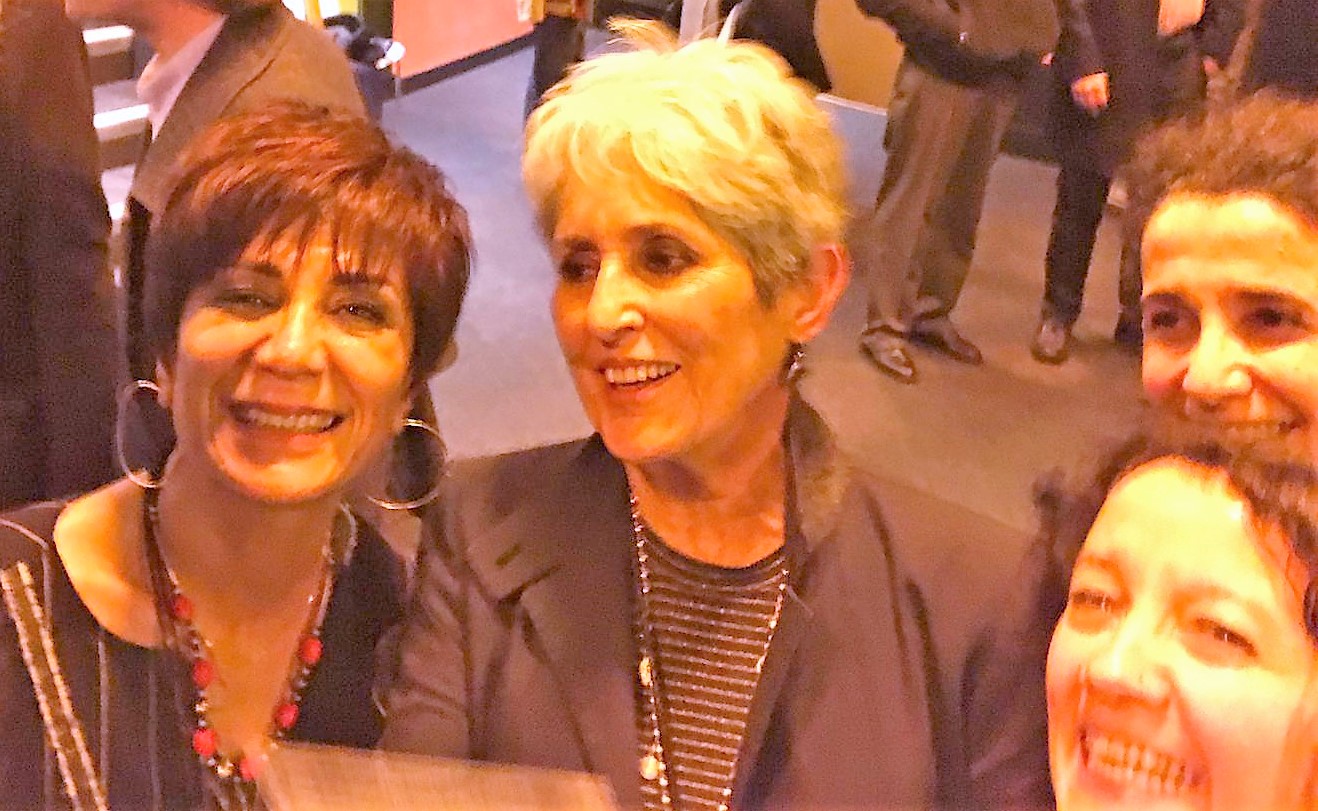 Second journey of the collection: From Evin with love